The fact that rabbits love to chew things is known by anyone who has seen rabbits. Well, chewing by your rabbit is not entirely wrong. It only becomes a problem when they begin to chew on things that they shouldn’t chew on. These may be furniture, wires and other household items. This trait is either dangerous to the animals or you may end up with a household full of destruction. As such, you need to find a way to ensure that your bunnies are trained not to chew any such things. Rather, they should chew more on the appropriate things. Here are the ways you can train your bunny not to chew on your items.

Provide them with more hay

Naturally, rabbits need to chew, a lot. It’s beneficial to them as their teeth always continue to grow and without chewing, they can end up having health problems. This makes chewing a very vital thing in the life of bunnies. It’s natural for them. However, without enough hay to chew, they’ll definitely begin to form the habit of chewing on your items. Each day, they should be provided with hay that weighs the same as their weight. Though this may seem too much, they need this quantity of honey to stay healthy and busy chewing on the right things. So, by ensuring that they have enough hay, you train them that they should only chew hay and not your items. 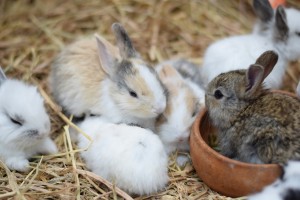 Because of boredom, some bunnies will begin to form the habit of chewing anything on their path. So, ensuring that they have enough to occupy them during the day will keep their minds off chewing your household things. Further, enriching their environments don’t have to be an expensive affair. For instance, you can simply put them some hay in a box and include some treats among the hay. This will make the rabbits get involved in looking for the treat among the hay and so will not think about your items. With time they begin to learn that whatever they should chew must only be the hay that you provide for them.

The habit of chewing items by your bunny may be as a result of an imbalance of their hormones. If old enough, you should always ensure that the rabbits are spayed or neutered.

The first instinct for any bunny owner is always negative reinforcement. Yelling at the bunny or clapping your hands only make the bunny more scared of you but it doesn’t help them to know that what they’re doing is wrong. So, when the bunny doesn’t chew or chews only on the right things, provide them with treats so that they’re able to associate treats and good behaviour. Such a positive reinforcement enables the rabbit to learn not to chew things anyhow.

Spend Time With them Outside

You can take your rabbit outside if the place is safe and the weather conditions good. This allows them to chew on the things they get out there the much they want. If you regularly do this with them, they begin to know that chewing should only be done when outside. When you bring the rabbit inside the house, their interest won’t be on chewing but eating and taking a nap. 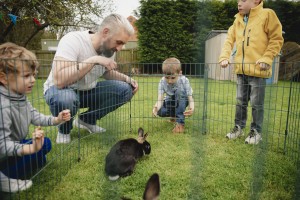